For this first time since Stellenbosch University’s Welgevallen Cellar started to make their own wine in 2008, they won a double gold medal on this year’s Veritas Vertex Awards earlier in October. The cellar’s Die Laan Merlot Reserve 2017 was also the only Merlot among the 1 491 total entrees to receive this accolade.

This was one of the biggest rewards for winemaker Riaan Wassung in his fifteen years at the cellar. In 2010 his Pinotage got him a spot in the ABSA Top Ten Pinotage competition. “I remember that specific harvest that I bought in 2017 from Bellevue Wine Estate. The grapes were beautiful. They were small, had a lovely flavour profile and a dark, intense colour – almost like a Cabernet. I thought they showed a lot of potential, especially during fermentation,” said Riaan.

He bottled the wine during the middle of 2018 and entered it in last year’s Veritas awards, but according to Riaan, it was still too early for the wine (“it was still in bottle shock”), and he returned home with a bronze medal. This year he decided to enter the wine again, as he had enough stock left, and his efforts paid off. To be awarded this double gold medal, the judges had to score the wine at least 93 out of 100.

Riaan said this about the Die Laan Merlot Reserve 2017 in a previous interview: “The wine has a very intense red colour, good extraction and a lovely balance. The tannin structure is full and complex, with typical red berry and cassis aromas on the nose.”

Apart from the Merlot Reserve, Riaan entered four more wines this year, a Chenin Reserve 2018, Cabernet Sauvignon 2017 and a Chenin Blanc 2018 (which won a silver medal each),  and a Shiraz 2017(bronze medal).

Riaan graduated from Stellenbosch University with BScAgric and MSc Agric degrees in Viticulture and Oenology and joined the Welgevallen Cellar in 2004 as cellar manager and winemaker. Over the past few years, he gradually added more cultivars and every year his growing selection of wine receives more Veritas awards, amongst them a few gold medals. In line with the University’s mission for excellence, it is essential for Riaan to constantly improve on the quality of the wine. Riaan and his family, his wife Tilanie, and children Daniël (4 years) and Nina (6), stays on Zevenzicht.

Apart from his right-hand man, William Smith, Riaan is looking after almost everything in the cellar. He answers the phone, produces and sells the wine, market it and make sure the word gets out as soon as a bottle of new wine is ready for consumption. Prof Wim de Villiers, the SU’s rector and vice-chancellor, and his wife are amongst Riaan’s top clients. Most of his wine is sold within SU’s community of staff and students of different departments and faculties.

So, what has Riaan in store for the future of the Welgevallen cellar and its wines? One of his dreams, says Riaan, is to create a beautiful tasting room to complement this cellar. There are plans to plant new vineyards close to the cellar, and of course, there are already new wines bottled for the next round of Veritas awards: a 2018 Merlot Reserve. A 2018 Malbec and a 2019 Chenin Reserve which are in oak barrels, so watch this space. Maybe there is another double gold award waiting in the wings.

The Welgevallen Cellar is the only cellar of its kind at a South African university and falls under the Faculty of AgriSciences. SU is the only university to offer viticulture and oenology as a under as post-graduate course.

If you are worried you might not get a taste of this wine, rest assured, there are almost 800 bottles of Die Laan Merlot Reserve 2017 in the Welgevallen Cellar left. But beware, they are selling fast. The Merlot Reserve sells at R150 per bottle. For sales, email Riaan at winesales@sun.ac.za or 021 808 2925, or visit the Welgevallen Cellar during office hours from 9am to 4pm. You will find it located between Paul Roos Gymnasium and Coetzenburg in Stellenbosch. For more information, visit www.facebook.com/DieLaanWines. 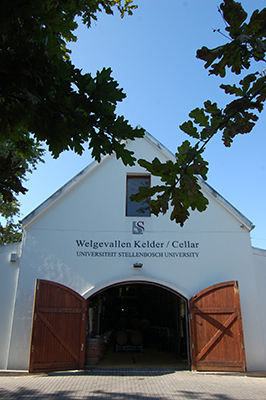 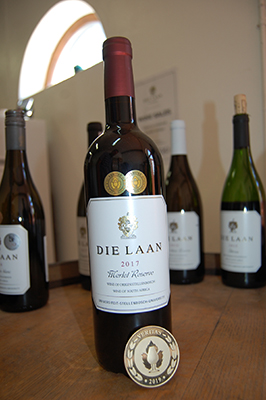