Globally, 2016 was a bit like a Michael Bay movie (without Megan Fox or lens flares): packed with far more action than we’re used to - with #Fees, Trumps, Brexits, Olympics, Zika, hurricanes and earthquakes, new Potters, Tesla’s Autopilot…  It was no different here at Innovus – although our action has been far more positive! Here are just a few of the highlights of our year,

After months of meetings, reviews, panels, opinions and input, the Trademark Policy, which governs where and when Stellenbosch University’s name and identity can be used, was finalised. Maties Football, which has been under our curation for the last 4 years, is finally ready to gear up and step out on its own. Together with our partner, Forwardzone, and with world class facilities and training, we are now a much more attractive football ‘destination’ and are expecting results in the coming year that match those of our academic endeavours. Our Short Courses Division, under the eagle-eye of Carol Kat, has maintained over 500 individual courses being run yearly and, with the (rather sexy) new website going live, has become substantially easier to navigate – and the 15000-odd registrations are an accurate reflection of the improvements made. To better cater for Stellenbosch University’s medical students, we opened our first satellite office on the Tygerberg Campus. We now have a dedicated staff-member on-site every Thursday – pop in for a coffee! 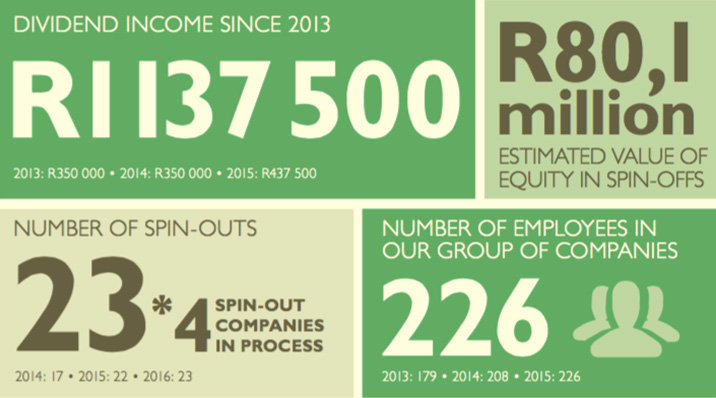 On a personal note, we were very lucky to grow our family with our new technology transfer officer, Nolene Singh, and accounting wunderkind, Baryl Strauss, while a teary farewell was bid to both Johnathan Smit, who left to head up Deloitte’s Greenhouse, and Venessa Williams, who is now focusing on her young child.

New projects in the pipeline:

We’ve been collectively busier than proverbial bees this last year. Researchers at our University have developed a piezoelectric nanosensor that can be used to detect pathogens – in a body of water of a body of a person – far more accurately and far less expensively than existing solutions. All it needs now is a cool name.

SharkSafe (which makes our oceans safer from sharks and for sharks) received its second round of Funding from TIA, and recently completed its second year of testing, where it proved 100% successful in excluding white sharks from the area in which it was installed. Sporatec, a device that samples and detects fungal and bacterial air (in anywhere from hospitals to homes) is about to become a commercial company, so the service can be made available across the country.

We're also making huge progress with the licensing of both the wheat and grain varietals, which are both in the process of being licensed.

A few months ago we put out a call for ‘incremental innovations’ that are less traditional, but just as valuable. The Faster Kettle is looking promising, while the Childproof Seat-belt Clip is kicking into its ‘use-test’ phase. And don’t forget Dog’s Best Friend, a motion-sensor water-feeder (which our own William Cloete is helping to develop), is also about to enter its own ‘use-case’ development stage.

Our most delicious innovation, S’Cool Beans, was recently placed second in the IUFoST’s (International Union of Food Science and Technology) Food Scientists Fighting Hunger competition. For those who haven’t tried it yet, S’Cool Beans is a nutritious, bean-based spread, that doesn’t taste like a nutritious, bean-based spread – and you should be able to find it on the shelves of certain major retailers very shortly. The 2016 Department of Food Science New Product Development Competition has also yielded some tasty new treats, which you can read about a little later in this newsletter. 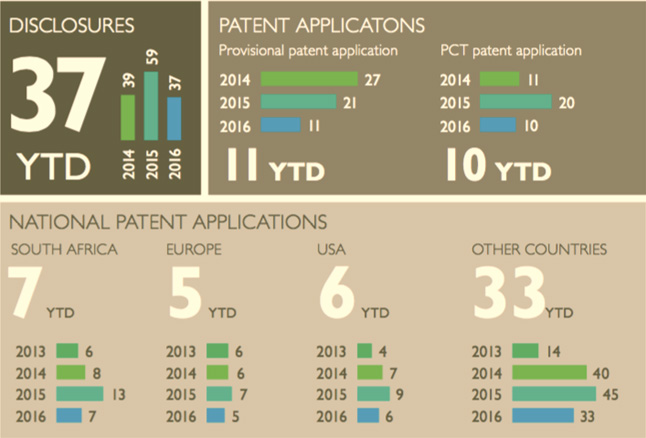 2016 has been a remarkable year for fledgeling Innovus companies. CubeSpace is taking off (literally), as their ZA-AeroSat satellite makes its way to the International Space Station, where it will gather research information on the (mostly unexplored) lower thermosphere, The business itself will be incorporated next year. Synsurf, makers of one of the only two synthetic lung surfactants on the planet, has further distanced itself from competition by adding anti-cancer and anti-inflammatory properties to its patent application, as well as the fact that it can be used for the transmission of medication to patient through the surfactant itself (a far more effective transmission mechanic in many cases). BridgIoT has launched their new GeasyTM Mark 4 device, which is substantially smaller and more cost effective, and then tested and now installed over 180 units, all running on their cloud platform (another 120 should be installed by February 2017). Custos Media Technologies, one of our spin-out companies and a tenant in the LaunchLab have raised a fortune in funding (R6m of which came from TIA)… They are about to launch into the eBook industry as well as preparing to entire into the Grindstone Start-Up Accelerator Programme. 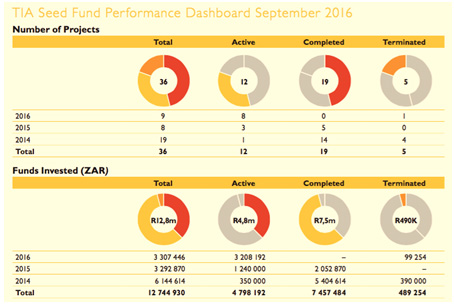 The Nedbank Stellenbosch University LaunchLab is doing a remarkable job of attracting corporate interest in their tenants (some of whom we mentioned in the previous section), but also in The LaunchLab itself. Santam, MultiChoice, Nedbank and Attacq have all hitched their wagons to our rides as sponsors.

We’re proud to state that our Technology Transfer Offices are pulling the weight of thousands and are running one of the most successful portfolios of all the TIA Seed Fund projects. We’ve also managed to acquire funding from the TIA Seed Fund for 9 new projects, like X-Ray Phantom, Quad-mode antenna and TB Biomarker, and establish 5 completely new companies. That’s over R3mil put to very good use…

A few months ago we set out with a few other universities to create a University Technology Fund that would allow universities across South Africa to provide support and funding for their technology projects, making a bigger difference than they could in isolation. We’re ecstatic to tell you that, while it’s still early days, the amount of interest we’ve received from high-level investors is really promising, and we’re in the process of finalising the documentation. More about this next year!

Overall, 2016 is a year we’re very proud of, and we could not have done it without the remarkably dedicated team at Innovus, or the brilliance and persistence of the minds at Stellenbosch University.  Our researchers never cease to amaze us with the wonderful inventions they make and it is a privilege for us to work with you on bringing these projects to the market.

But we don’t plan on taking is easy in ’17. Keep an eye out for some interesting developments over the next few months.

Until then we wish all our staff, friends, investors and associates a very happy festive season.