The SharkSafe barrier exploits the sensitivity of the electro‐receptors in sharks by over‐stimulating their sensory systems, while not affecting bony shes and other marine life.

This innovation aims to provide effective shark-deterrence by arranging multiple elongate barrier members in the ocean so as to have a thicket-like appearance when viewed from within the water. members are manufactured from a material on which algae grows well. The thicket-like appearance of the barrier in combination with algae growth on the members allows the barrier to resemble a kelp forest. Research has indicated that kelp forests deter certain species of sharks and that sharks generally avoid entering into
kelp forests.

To enhance the effectiveness of the shark barrier, magnets are arranged along the length of each member. It has been shown that magnets deter a number of shark species, including great white sharks, bull sharks, tiger sharks, hammerhead sharks, and rays. Plastic tubes containing high density foam may be used as barrier members in order to provide oatation.

The innovation thus provides an environmentally friendly and cost-effective alternative to conventional anti-shark devices such as shark nets, drum lines and exclusion nets.

The innovation proposes a shark barrier comprising multiple, preferably interconnected, elongate members extending from the sea oor to the sea surface. The magnets provided on the members exploit the sensitivity of the Ampullae of Lorenzini in sharks by over-stimulating their electro-sensory systems, while not affecting bony shes.

A PCT/IB2013/060446 application has been led, as well as a South African patent application. 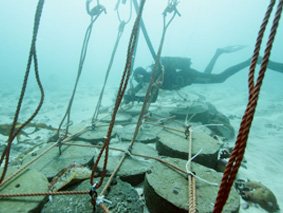