A technology for the radiometric correction of high spatial resolution imagery (aerial or UAV).  The imagery is calibrated to approximate surface reflectance by fusing with concurrent and collocated satellite imagery.  The technique allows the production of seamless mosaics corrected for coarse scale atmospheric and bidirectional reflectance distribution function (BRDF) effects and does not, like many existing methods, require the manual acquisition (or provision) of ground reflectance references.

Unlike other radiometric correction techniques, this technology does not require manual field reflectance measurements, placement of targets of known reflectance, or detailed knowledge of atmospheric conditions.  Coarse BRDF adjustments can be made implicitly.  The method is relatively computationally efficient and can be applied to large mosaics of imagery consisting of thousands of images.

Use of high spatial resolution aerial/UAV imagery is limited by radiometric variations caused by atmospheric and BRDF effects.  These variations create unsightly discontinuities and gradients between and within images, and inhibit their use for quantitative analysis.  This method compensates for these unwanted variations, creating a visually appealing mosaic that is calibrated to approximate surface reflectance

A proof of concept was developed and tested for high resolution (50cm) multi-spectral aerial imagery by calibrating with (500m) MODIS satellite data.  The result was published as a peer-reviewed scientific article in the International Journal of Remote Sensing. The technology was implemented in C++ programming language. An application programming interface (API) needs to be developed to make the technology more accessible and easier to use. Further testing and development is required to extend its use, and evaluate on UAV imagery and other satellite data.

The technology is patent pending under national phase applications of WO 2018/055546 in South Africa, Australia and the USA.

Adriaan van Niekerk from the Department of Geography & Environmental Studies

Dugal Harris from the Department of Geography & Environmental Studies 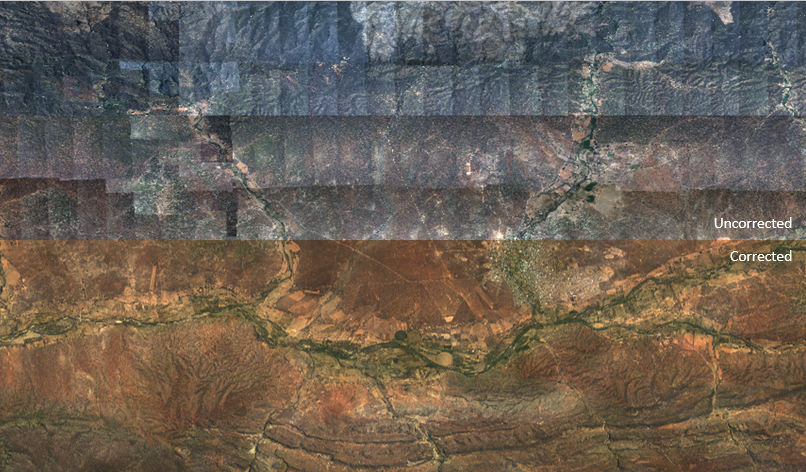